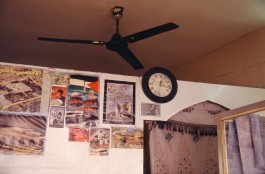 Ahlam Shibli's photographic works are based on both a documentary and conceptual approach. In her work, the artist deals with the contradictory implications of the term "home". How is it constituted? What images, spaces, objects underlie our notion of "home"? Do concepts of “home“ differ culturally? In addition, Ahlam Shibli's artistic questioning circulates around the relation of "home," its loss, and the social strategies for coming to terms with this loss. In this way, the artist also sheds light on the restrictions and limitations that the idea of "home" imposes on individuals as well as communities when it is shaped by a repressive identity politics. Ahlam Shibli's series of images are based on intensive research trips. Probably the most famous of these took her to Poland, where she photographed numerous children's homes and their residents (Dom Dziecka. The house starves when you are away, 2008). In Germany, Ahlam Shibli became particularly known for the photographs she took of people involved in so-called associations of German expellees (Heimat, 2016-2017). In 2017, at documenta 14 in Athens and Kassel, curated by Adam Szymczyk, she juxtaposed these with photographic works she made of guest worker associations in North Hessen.

Adam Szymczyk is a curator and writer based in Zurich. He is Curator at Large at the Stedelijk Museum in Amsterdam, as well as member of the board of the Museum of Modern Art in Warsaw. Adam Szymczyk was Artistic Director of documenta 14 in Athens and Kassel in 2017. Between 2003 and 2014 he served as director and chief curator at Kunsthalle Basel, where he curated Alexandra Bachzetsis: Show, 2008; Danh Vo: Where the Lions Are, 2009; Moyra Davey: Speaker Receiver, 2010; Pamela Rosenkranz: Feeding, Fleeing, Fighting, Reproduction, 2012 among many other exhibitions. In 1997, he co-founded the Foksal Gallery Foundation in Warsaw. In 2008, he co-curated the 5th Berlin Biennial for Contemporary Art together with Elena Filipovic. In 2011, he was a recipient of the Walter Hopps Award for Curatorial Achievement at the Menil Foundation in Houston.